Popular reality TV star Kim Kardashian was spotted donning an all-leather black outfit that covered every part of her body. Her outfit included a trench coat, gloves, head covering and a tiny handbag that was the only thing not in black The revered fashionista is in New York ahead of the Met Gala that is set to be held on Monday 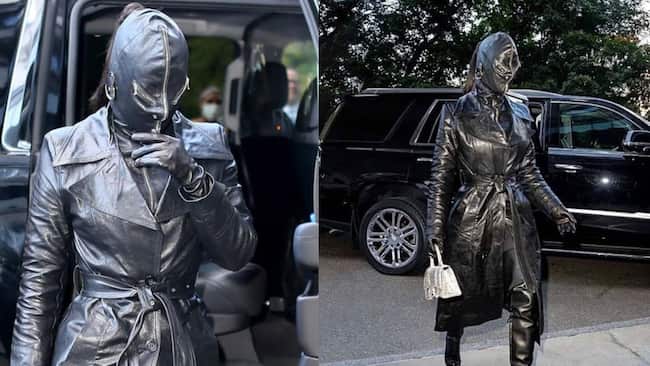 On Saturday, September 11, the celebrity made another bold fashion statement as she arrived in New York donning a head-to-toe leather outfit that was assembled by Balenciaga, according to people The mother of four, who is in New York for the Met Gala to be held on Monday, was spotted getting out of an SUV showing off her great fashion sense that left many awestruck.
Her outfit included leather pants and top, a heavy trench coat, gloves, stiletto heel boots and head covering all the way to the back, leaving only a small hole for her ponytail,
The only thing in Kim’s possession that was not black was her stunning shiny white handbag. The fashion guru was checking into the Ritz-Carlton Hotel on Central Park South. The 40-year-old shared stunning photos on her Instagram of her stunning outfit and captioned it with a knife emoji. The outfit seemed to have not impressed many of her fans, who questioned why she wore it- with others referring to American Horror Story, as some claimed Kanye was behind it. Here are a few reactions: @andreahelfrichofficial said: “Is anyone else getting major American Horror Story vibes?” @caitlinallendrums said: Kim honey noo this is not American Horror Story.” @carlyjgate said: “Not ur best look.”