Rita Dominic a popular nollywood actress, took social media by surprise in December 2020 after she revealed the face of her lover, Fidelis Anosike 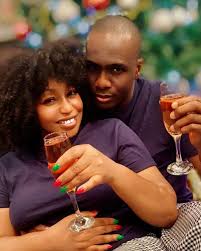 The movie star has been subtle about her love life, but she attended popular media mogul, Mo Abudu’s star studded 57th birthday in Lagos
A video fo the moment Rita and her man arrived the venue made rounds on social media and it has generated mixed reactions.
Mo Abudu clocked 57 on September 11 and she hosted celebrities and important dignitaries in the country to a lavish themed party.

Part of the stars who showed up at the birthday was Rita Dominic and she attended with her man, Fidelis Anosike
Rita Dominic stuck to the theme of the party and donned a short wine dress with statement sleeves and a beautiful headband.
As expected the actress did not falter in the beauty department with her well made up face.

Dominic held on to her man as they both descended the stairs to exchange pleasanteries with other guests.